The first action involves the two artists maintaining a gaze, as they walk backwards away from each other unraveling a thread. They stop, break the the thread, and simultaneously drop the thread on the floor. They then walk towards each other, take a small step sideways, and repeat this action. They repeat this 30 times, an both are now on the other side of the space, separated from each other by a wall.

The second action involves the duo gazing at each other “through” the wall as they simultaneously, dropping chopsticks in 30 second intervals. Each time taking one step sideways to their original position.

The final action is simply the duo, standing very close, and gazing into each others eyes, as a metronome ticks at 60 bpm until the one hour mark.

with the kind support of
Bundeskanzleramt Österreich
Austrian Embassy Helsinki 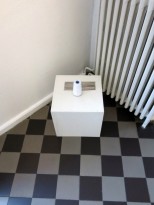 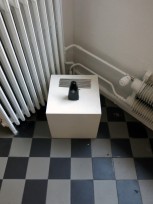